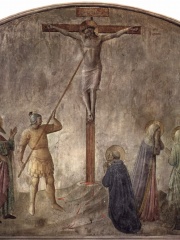 Longinus () is the name given to the unnamed Roman soldier who pierced the side of Jesus with a lance and who in medieval and some modern Christian traditions is described as a convert to Christianity. His name first appeared in the apocryphal Gospel of Nicodemus. The lance is called in Christianity the "Holy Lance" (lancea) and the story is related in the Gospel of John during the Crucifixion. Read more on Wikipedia

Longinus is most famous for being the Roman soldier who stabbed Jesus Christ on the cross.

Page views of Longinuses by language

Among people born in 100, Longinus ranks 4. Before him are Ptolemy, Pope Alexander I, and Joseph of Arimathea. After him are Dionysius the Areopagite, Thecla, James the Less, Decebalus, Pope Telesphorus, Pope Hyginus, Saint Sarah, and Pope Victor I. Among people deceased in 100, Longinus ranks 14. Before him are Elizabeth, Salome, Zechariah, John the Evangelist, Zacchaeus, and Caiaphas. After him are Barabbas, Dionysius the Areopagite, Herodias, Thecla, Salome, and Apollonius of Tyana.