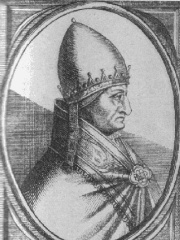 Pope Gregory X (Latin: Gregorius X; c. 1210 – 10 January 1276), born Teobaldo Visconti, was head of the Catholic Church and ruler of the Papal States from 1 September 1271 to his death and was a member of the Secular Franciscan Order. He was elected at the conclusion of a papal election that ran from 1268 to 1271, the longest papal election in the history of the Catholic Church. He convened the Second Council of Lyon and also made new regulations in regards to the papal conclave. Read more on Wikipedia

Pope Gregory X is most famous for convening the Second Council of Lyon in 1274.

Among people born in 1210, Pope Gregory X ranks 3. Before him are Saadi Shirazi and Pope Honorius IV. After him are Afonso III of Portugal, Birger Jarl, Treniota, Chaka of Bulgaria, Guan Hanqing, Floris IV, Count of Holland, Toros Roslin, Muqi, and Giacomo da Lentini. Among people deceased in 1276, Pope Gregory X ranks 1. After him are Pope Adrian V, Pope Innocent V, James I of Aragon, Ahmad al-Badawi, Vasily of Kostroma, and Guido Guinizelli.