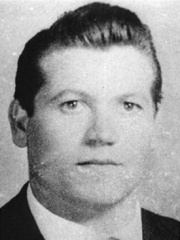 Bernardo Provenzano (Italian pronunciation: [berˈnardo provenˈtsaːno]; 31 January 1933 – 13 July 2016) was an Italian mobster and chief of the Sicilian Mafia clan known as the Corleonesi, a Mafia faction that originated in the town of Corleone, and de facto il capo dei capi (the boss of bosses). His nickname was Binnu u tratturi (Sicilian for "Bernardo the tractor") because, in the words of one informant, "he mows people down." Another nickname was il ragioniere ("the accountant") due to his apparently subtle and low-key approach to running his crime empire, at least in contrast to some of his more violent predecessors.Provenzano was part of the Corleonesi Mafia clan who backed mob boss Luciano Leggio in the ambush and murder of Michele Navarra in the late 1950s. In 1963, Provenzano became a fugitive after a failed hit. Read more on Wikipedia

Bernardo Provenzano is most famous for being the head of the Sicilian Mafia.