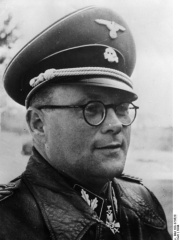 Karl Franz Gebhardt (23 November 1897 – 2 June 1948) was a German medical doctor and a war criminal during World War II. He served as Medical Superintendent of the Hohenlychen Sanatorium, Consulting Surgeon of the Waffen-SS, Chief Surgeon in the Staff of the Reich Physician SS and Police, and personal physician to Heinrich Himmler.Gebhardt was the main coordinator of a series of surgical experiments performed on inmates of the concentration camps at Ravensbrück and Auschwitz. These experiments were an attempt to defend his approach to the surgical management of grossly contaminated traumatic wounds, against the then-new innovations of antibiotic treatment of injuries acquired on the battlefield.During the Subsequent Nuremberg Trials, Gebhardt stood trial in the Doctors' trial (American Military Tribunal No. I). Read more on Wikipedia

Karl Gebhardt was a Nazi doctor who experimented on prisoners in concentration camps. He is most famous for his experiments with bone transplants and the sterilization of prisoners.

Among MAFIOSOS In Germany

Among mafiosos born in Germany, Karl Gebhardt ranks 1. After him are Jenny-Wanda Barkmann (1922) and Richard Hauptmann (1899).