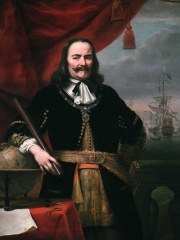 Michiel Adriaenszoon de Ruyter (IPA: [miˈxil ˈaːdrijaːnˌsoːn də ˈrœytər]; 24 March 1607 – 29 April 1676) was a Dutch admiral. Widely celebrated and regarded as one of the most skilled admirals in history, De Ruyter is arguably most famous for his achievements with the Dutch Navy during the Anglo-Dutch Wars. Read more on Wikipedia

Michiel de Ruyter was a Dutch admiral who led the Dutch fleet during the Second Anglo-Dutch War. He is most famous for his victory over the English at the Battle of Solebay in 1672.

Among military personnels, Michiel de Ruyter ranks 124 out of 1,468. Before him are George S. Patton, Michael Wittmann, Bohemond I of Antioch, Louis-Nicolas Davout, Walther von Brauchitsch, and Zhao Yun. After him are Werner von Blomberg, Perdiccas, Raymond IV, Count of Toulouse, Antipater, André Masséna, and Axel von Fersen the Younger.

Among MILITARY PERSONNELS In Netherlands