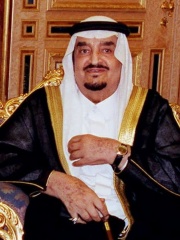 Fahd bin Abdulaziz Al Saud, Custodian of the Two Holy Mosques (Arabic: فهد بن عبد العزيز آل سعود‎ Fahd ibn ‘Abd al-‘Azīz Āl Sa‘ūd; 1921 or 1923 – 1 August 2005) was King of Saudi Arabia from 1982 to 2005. He was one of 45 sons of Saudi founder Ibn Saud and the fourth of his six sons who were kings (Saud, Faisal, Khalid, Fahd, Abdullah and Salman). Fahd was appointed Crown Prince when his half-brother Khalid succeeded another half-brother King Faisal, who was assassinated in 1975. Read more on Wikipedia

Since 2007, the English Wikipedia page of Fahd of Saudi Arabia has received more than 1,621,242 page views. His biography is available in 64 different languages on Wikipedia making him the 971st most popular politician.

Page views of Fahd of Saudi Arabias by language

Among politicians, Fahd of Saudi Arabia ranks 966 out of 14,801. Before him are Constantine III, Calvin Coolidge, Oscar II of Sweden, Yazdegerd III, Barbara of Cilli, and Klement Gottwald. After him are Christian VIII of Denmark, Dionysius I of Syracuse, Carloman II, Henry I of England, Sigismund I the Old, and Mohammad Mosaddegh.