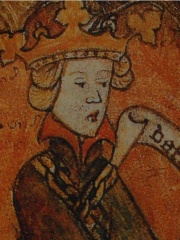 Magnus IV (April or May 1316 – 1 December 1374; Swedish Magnus Eriksson) was King of Sweden from 1319 to 1364, King of Norway as Magnus VII (including Iceland and Greenland) from 1319 to 1355, and ruler of Scania from 1332 to 1360. By adversaries he has been called Magnus Smek (English: Magnus the Caresser). Referring to Magnus Eriksson as Magnus II is incorrect. Read more on Wikipedia

Page views of Magnus IV of Swedens by language

Among politicians, Magnus IV of Sweden ranks 2,152 out of 15,577. Before him are Empress Xiaoyichun, Eugène Edine Pottier, Rudolph of France, Safi of Persia, Emperor Annei, and Denis Sassou Nguesso. After him are Princess Charlotte, Duchess of Valentinois, Svatopluk I of Moravia, Hyejong of Goryeo, Alexander Jagiellon, Géza II of Hungary, and Hostilian.