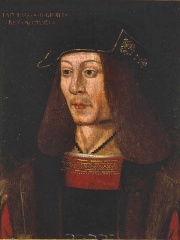 James IV (17 March 1473 – 9 September 1513) was the King of Scotland from 11 June 1488 to his death. He assumed the throne following the death of his father King James III (1451/52–1488, reigned 1460–1488) at the Battle of Sauchieburn, a rebellion in which the younger James played an indirect role. He is generally regarded as the most successful of the Stewart monarchs of Scotland, but his reign ended in a disastrous defeat at the Battle of Flodden. Read more on Wikipedia

Since 2007, the English Wikipedia page of James IV of Scotland has received more than 1,942,188 page views. His biography is available in 52 different languages on Wikipedia making him the 1,851st most popular politician.

Page views of James IV of Scotlands by language

Among politicians, James IV of Scotland ranks 1,839 out of 14,801. Before him are Charles Edward Stuart, Philip, Duke of Parma, Egon Krenz, Yuan Shu, Kilij Arslan I, and Juan Manuel Santos. After him are King Wen of Zhou, Di Renjie, Andrew I of Hungary, Semerkhet, Hisham ibn Abd al-Malik, and Viktor Orbán.