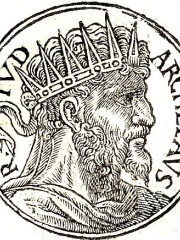 Herod Archelaus (Ancient Greek: Ἡρῴδης Ἀρχέλαος, Hērōidēs Archelaos; 23 BC – c. AD 18) was ethnarch of Samaria, Judea, and Idumea, including the cities Caesarea and Jaffa, for a period of nine years (c. 4 BC to AD 6). Archelaus was removed by Roman emperor Augustus when Judaea province was formed under direct Roman rule, at the time of the Census of Quirinius. He was the son of Herod the Great and Malthace the Samaritan, and was the brother of Herod Antipas, and the half-brother of Herod II. Read more on Wikipedia

Herod Archelaus was a Roman client king of Judea from 4 BC to 6 AD. He was the son of Herod the Great and Malthace, and was the last of the Herodians. Archelaus was a brutal ruler, and is most famous for the massacre of Bethlehem in his attempt to kill the infant Jesus.

Among politicians, Herod Archelaus ranks 1,291 out of 15,710. Before him are Numerian, Constantius III, Safiyya bint Huyayy, Charles Edward Stuart, Ptolemy IX Lathyros, and Manasseh of Judah. After him are Philip V of Macedon, Charles III of Naples, Frederick IV of Denmark, Yang Shangkun, Marwan II, and Louis the Child.

Others Born in 23 BC