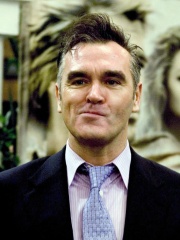 Steven Patrick Morrissey (; born 22 May 1959), known mononymously as Morrissey, is an English singer, songwriter, and author. He came to prominence as the frontman of rock band the Smiths, who were active from 1982 to 1987. Since then, he has pursued a successful solo career. Read more on Wikipedia

Since 2007, the English Wikipedia page of Morrissey has received more than 6,813,336 page views. His biography is available in 46 different languages on Wikipedia making him the 87th most popular singer.

Page views of Morrisseys by language

Among singers, Morrissey ranks 87 out of 3,001. Before him are Ian Gillan, Prince, Robert Plant, France Gall, Gwen Stefani, and Steven Tyler. After him are Anatoliy Solovianenko, Harry Belafonte, Roy Orbison, Domenico Modugno, Celine Dion, and Rihanna.