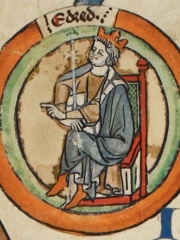 Eadred (c. 923 – 23 November 955) was King of the English from 26 May 946 until his death. He was the younger son of Edward the Elder and his third wife Eadgifu, and a grandson of Alfred the Great. Read more on Wikipedia

Eadred is most famous for being the first king of the united kingdom of England. He was also the first to unite the kingdoms of Northumbria, Mercia, and Wessex.

Page views of Eadreds by language

Among politicians, Eadred ranks 1,910 out of 15,577. Before him are Melisende, Queen of Jerusalem, Baldwin III of Jerusalem, Clodius Albinus, Grand Duke Dmitri Pavlovich of Russia, Gelimer, and Dom Pérignon. After him are Daniel of Galicia, Philippikos Bardanes, Cleopatra V of Egypt, Mongkut, Alec Douglas-Home, and Anders Fogh Rasmussen.