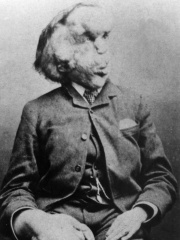 Joseph Carey Merrick (5 August 1862 – 11 April 1890), often erroneously called John Merrick, was an English man known for having severe deformities. He was first exhibited at a freak show under the stage name "the Elephant Man" and then went to live at the London Hospital after he met Sir Frederick Treves, subsequently becoming well known in London society. Merrick was born in Leicester and began to develop abnormally before the age of five. Read more on Wikipedia

Joseph Merrick, also known as "The Elephant Man," was born in 1862 and died in 1890. He was born with a rare genetic condition called Proteus Syndrome. This condition caused him to have a severely deformed body and a large, lumpy head. He was exhibited as a human curiosity in freak shows across England and Europe.

Among people born in 1862, Joseph Merrick ranks 15. Before him are William Henry Bragg, Allvar Gullstrand, Aristide Briand, Victoria of Baden, Pyotr Stolypin, and Niko Pirosmani. After him are J. Bruce Ismay, Hilma af Klint, Louis Barthou, Helene Schjerfbeck, Cecilia Bowes-Lyon, Countess of Strathmore and Kinghorne, and Nikolai Yudenich. Among people deceased in 1890, Joseph Merrick ranks 11. Before him are César Franck, William III of the Netherlands, Amadeo I of Spain, Gyula Andrássy, Duchess Helene in Bavaria, and Henri Nestlé. After him are Richard Francis Burton, Augusta of Saxe-Weimar-Eisenach, William Kemmler, John Henry Newman, Niels Gade, and Antoine, Duke of Montpensier.

Among CELEBRITIES In United Kingdom