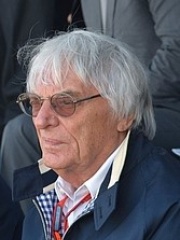 Bernard Charles Ecclestone (born 28 October 1930) is a British business magnate. He is the former chief executive of the Formula One Group, which manages Formula One and controls the commercial rights to the sport, and part-owns Delta Topco, the previous ultimate parent company of the Formula One Group. As such, he was commonly described in journalism as 'F1 Supremo'.Ecclestone entered two Grand Prix races as a driver, during the 1958 season, but failed to qualify for either of them. Read more on Wikipedia

Since 2007, the English Wikipedia page of Bernie Ecclestone has received more than 3,269,035 page views. His biography is available in 40 different languages on Wikipedia making him the 49th most popular businessperson.