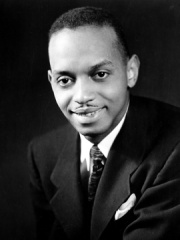 Donald Walbridge Shirley (January 29, 1927 – April 6, 2013) was an American classical and jazz pianist and composer. He recorded many albums for Cadence Records during the 1950s and 1960s, experimenting with jazz with a classical influence. He wrote organ symphonies, piano concerti, a cello concerto, three string quartets, a one-act opera, works for organ, piano and violin, a symphonic tone poem based on the 1939 novel Finnegans Wake by James Joyce, and a set of "Variations" on the 1858 opera Orpheus in the Underworld.Born in Pensacola, Florida, Shirley was a promising young student of classical piano. Read more on Wikipedia

Don Shirley is most famous for being a pianist and composer.

Among musicians, Don Shirley ranks 122 out of 2,675. Before him are Bill Evans, Neil Young, James Last, Till Lindemann, Fritz Kreisler, and Tony Iommi. After him are Compay Segundo, Pete Best, Arnaut Daniel, Ray Manzarek, Chris Slade, and Malcolm Young.