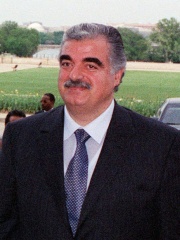 Rafic Bahaa El Deen Al Hariri (Arabic: رفيق بهاء الدين الحريري‎; Arabic pronunciation: [rafiːq al ħariːriː] 1 November 1944 – 14 February 2005) was a Lebanese business tycoon and politician who served as the Prime Minister of Lebanon from 1992 to 1998 and again from 2000 until his resignation on 20 October 2004 (2004-10-20). Hariri headed five cabinets during his tenure. He was widely credited for his role in constructing the Taif Agreement that ended the 15-year Lebanese Civil War. Read more on Wikipedia

Among politicians, Rafic Hariri ranks 1,046 out of 15,710. Before him are Andronikos I Komnenos, Cassander, Theophilos, Maurice, Mayer Amschel Rothschild, and Letizia Ramolino. After him are Calvin Coolidge, Leo V the Armenian, Hua Guofeng, Alexander Kolchak, Decebalus, and Onan.