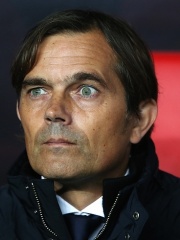 Phillip John-William Cocu (Dutch pronunciation: [ˈfilɪb ˈɟɔn ˈʋɪlijɑm koːˈky]; born 29 October 1970) is a Dutch professional football manager and former player who is the current manager of Championship club Derby County.Cocu was born in Eindhoven but raised in Zevenaar, playing youth football for local clubs DCS and De Graafschap. After a year at AFC '34, he started his professional career at AZ. In 1990, Cocu moved to Vitesse. A broken fibula disrupted his first season, but he became a first-team regular in the following four seasons. Read more on Wikipedia

Since 2007, the English Wikipedia page of Phillip Cocu has received more than 972,609 page views. His biography is available in 43 different languages on Wikipedia making him the 1,582nd most popular soccer player.