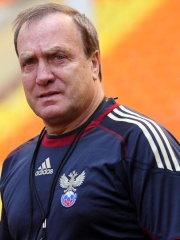 Dirk Nicolaas Advocaat (Dutch pronunciation: [ˈdɪk ˌɑtfoːˈkaːt] (listen); born 27 September 1947) is a Dutch former football player and coach who is currently the head coach of Eerste Divisie side ADO Den Haag. Advocaat was successful as a football player and as a coach, including three stints with the Netherlands national team. He has coached a number of clubs in the Netherlands and abroad (including the Russian club Zenit Saint Petersburg, with which he won the 2008 UEFA Cup Final), as well as the national teams of a number of countries, including South Korea, Belgium and Russia. Read more on Wikipedia

Dick advocaat is a Dutch liqueur made with gin, sugar, lemon juice, and advocaat, a type of eggnog. It is most famous for being served at Dutch weddings.