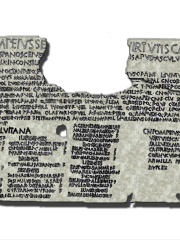 Gnaeus Pompeius Strabo (135 – 87 BC) was a Roman general and politician, who served as consul in 89 BC. He is often referred to in English as Pompey Strabo, to distinguish him from his son, the famous Pompey the Great, or from Strabo the geographer. Strabo's cognomen means "cross eyed". He lived in the Roman Republic and was born and raised into a noble family in Picenum (in the south and the north of the modern regions of Marche and Abruzzo respectively) in Central Italy, on the Adriatic Coast. Read more on Wikipedia

Among politicians, Pompeius Strabo ranks 4,110 out of 15,710. Before him are Francesco Maria I della Rovere, Duke of Urbino, Erwin Piscator, Teispes, Osroes I, Marine Le Pen, and Jacqueline, Countess of Hainaut. After him are Eleanor of Viseu, Kunigunde of Austria, Princess Louise of Saxe-Gotha-Altenburg, Lucius Munatius Plancus, Sextus Afranius Burrus, and Sigismund Kęstutaitis.

Others Deceased in 87 BC