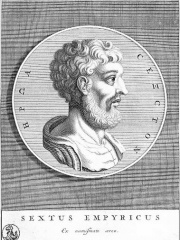 Sextus Empiricus (Greek: Σέξτος Ἐμπειρικός, Sextos Empeiricos; fl. mid-late 2nd century AD) was a Greek Pyrrhonist philosopher and Empiric school physician. His philosophical works are the most complete surviving account of ancient Greek and Roman Pyrrhonism, and because of the arguments they contain against the other Hellenistic philosophies, they are also a major source of information about those philosophies. In his medical work, as reflected by his name, tradition maintains that he belonged to the Empiric school in which Pyrrhonism was popular. Read more on Wikipedia

Sextus Empiricus is most famous for his work "Outlines of Pyrrhonism." His work is a commentary on the teachings of Pyrrho of Elis, who was a skeptic philosopher.

Among philosophers, Sextus Empiricus ranks 188 out of 1,081. Before him are Emmanuel Levinas, Posidonius, Hippasus, Han Fei, Jakob Böhme, and Muhammad Abduh. After him are Athanasius Kircher, Melissus of Samos, Pseudo-Dionysius the Areopagite, Ernest Renan, Pierre Bayle, and John Scotus Eriugena.