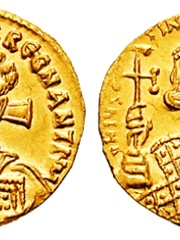 Justinian II (Greek: Ἰουστινιανός, romanized: Ioustinianos; 668/9 – 4 November 711), surnamed Rhinotmetos or Rhinotmetus (ὁ Ῥινότμητος, "the slit-nosed"), was the last Byzantine emperor of the Heraclian dynasty, reigning from 685 to 695 and again from 705 to 711. Like Justinian I, Justinian II was an ambitious and passionate ruler who was keen to restore the Roman Empire to its former glories, but he responded brutally to any opposition to his will and lacked the finesse of his father, Constantine IV. Consequently, he generated enormous opposition to his reign, resulting in his deposition in 695 in a popular uprising, and he only returned to the throne in 705 with the help of a Bulgar and Slav army. Read more on Wikipedia

Justinian II is most famous for being the last emperor of the Byzantine Empire. He was overthrown in a revolt in 695 and replaced by Leontios.