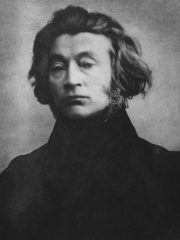 Adam Bernard Mickiewicz ([mit͡sˈkʲɛvit͡ʂ] (listen); 24 December 1798 – 26 November 1855) was a Polish poet, dramatist, essayist, publicist, translator and political activist. He is regarded as national poet in Poland, Lithuania and Belarus. A principal figure in Polish Romanticism, he is one of Poland's "Three Bards" (Polish: Trzej Wieszcze) and is widely regarded as Poland's greatest poet. Read more on Wikipedia

Since 2007, the English Wikipedia page of Adam Mickiewicz has received more than 498,112 page views. His biography is available in 83 different languages on Wikipedia making him the 211th most popular writer.

Among people born in 1798, Adam Mickiewicz ranks 3. Before him are Auguste Comte and Eugène Delacroix. After him are Pedro I of Brazil, Alexandra Feodorovna, Jules Michelet, Charles Albert of Sardinia, Giacomo Leopardi, Marie-Caroline of Bourbon-Two Sicilies, Duchess of Berry, František Palacký, August Heinrich Hoffmann von Fallersleben, and Josiah Warren. Among people deceased in 1855, Adam Mickiewicz ranks 5. Before him are Carl Friedrich Gauss, Søren Kierkegaard, Nicholas I of Russia, and Charlotte Brontë. After him are Gérard de Nerval, Infante Carlos, Count of Molina, François Rude, Adelaide of Austria, Pavel Nakhimov, Duchess Maria Dorothea of Württemberg, and François Magendie.