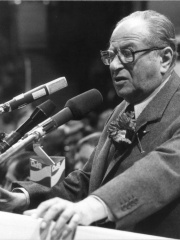 Bruno Kreisky (22 January 1911 – 29 July 1990) was an Austrian social democratic politician who served as Foreign Minister from 1959 to 1966 and as Chancellor from 1970 to 1983. Aged 72 at the end of his chancellorship, he was the oldest Chancellor after World War II. His 13-year tenure was the longest of any Chancellor in republican Austria. With his 13-year chancellorship, known as the Kreisky era, he is one of the most important political figures in the country as well as in Western European social democracy. Read more on Wikipedia

Bruno Kreisky is most famous for being the chancellor of Austria from 1970 to 1983. He was a social democrat and was known for his outspoken criticism of the United States, Israel, and apartheid in South Africa.

Among politicians, Bruno Kreisky ranks 3,446 out of 15,577. Before him are Muhammad I of Córdoba, Lê Duẩn, P. W. Botha, Alexander Danilovich Menshikov, Tutush I, and Emperor Tenji. After him are Jill Biden, Kyösti Kallio, Aleksandar Vučić, Yury of Moscow, Charles I Gonzaga, Duke of Mantua, and Ne Win.