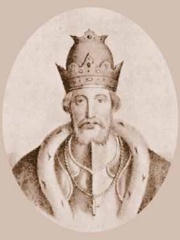 Yuriy Danilovich, also known as Georgiy Danilovich (Юрий Данилович in Russian) (1281 – 21 November 1325) was Prince of Moscow (1303–1325) and Grand Prince of Vladimir (from 1318). Yury was the oldest son of Daniel, the first prince of Moscow. His first official action was to defend Pereslavl-Zalessky against Grand Duke Andrew III. Upon Andrew's death the next year, Yury had to contend the title of Grand Duke of Vladimir with Mikhail of Tver. Read more on Wikipedia

Yury of Moscow is most famous for being the first Russian ruler to convert to Christianity.

Page views of Yury of Moscows by language

Among politicians, Yury of Moscow ranks 3,501 out of 15,710. Before him are Frederick I of Württemberg, John I Albert, Martin I of Sicily, Xanthippus, Sima Guang, and André-Hercule de Fleury. After him are Cardinal de Rohan, Bolesław III Wrymouth, Cleopatra Thea, Süleyman Çelebi, Gudfred, and Claude Louis Hector de Villars.

Among people born in 1281, Yury of Moscow ranks 2. Before him is Rudolf I of Bohemia. After him are Külüg Khan, Ivaylo of Bulgaria, Agnes of Austria, Waldemar, Margrave of Brandenburg-Stendal, Hamdallah Mustawfi, Castruccio Castracani, and Henry, 3rd Earl of Lancaster. Among people deceased in 1325, Yury of Moscow ranks 4. Before him are Charles, Count of Valois, Denis of Portugal, and Amir Khusrow. After him are Nizamuddin Auliya, Ghiyath al-Din Tughluq, and Stefan Vladislav II.