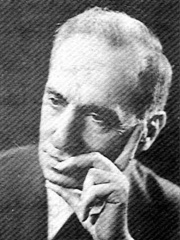 Michel Aflaq (Arabic: ميشيل عفلق, romanized: Mīšīl ʿAflaq‎, Arabic pronunciation: [miːʃeːl ʕaflaq], 9 January 1910 – 23 June 1989) was a Syrian philosopher, sociologist and Arab nationalist. His ideas played a significant role in the development of Ba'athism and its political movement; he is considered by several Ba'athists to be the principal founder of Ba'athist thought. Read more on Wikipedia

Michel Aflaq was a Syrian philosopher and Arab nationalist. He is most famous for co-founding the Ba'ath Party.

Among politicians, Michel Aflaq ranks 3,390 out of 15,577. Before him are Yuri of Goguryeo, William II of Württemberg, Artaphernes, Hussein Kamel of Egypt, Giacomo Matteotti, and Charles the Younger. After him are Margaret of Savoy, Vicereine of Portugal, Jayavarman II, Emperor Ōjin, Charles VII of Sweden, Hugh of Italy, and Margaret of France, Duchess of Berry.