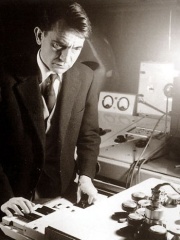 Pierre Henri Marie Schaeffer (English pronunciation: (listen), French pronunciation: ​[ʃɛfɛʁ]; 14 August 1910 – 19 August 1995) was a French composer, writer, broadcaster, engineer, musicologist, acoustician and founder of Groupe de Recherche de Musique Concrète (GRMC). His innovative work in both the sciences—particularly communications and acoustics—and the various arts of music, literature and radio presentation after the end of World War II, as well as his anti-nuclear activism and cultural criticism garnered him widespread recognition in his lifetime. Amongst the vast range of works and projects he undertook, Schaeffer is most widely and currently recognized for his accomplishments in electronic and experimental music, at the core of which stands his role as the chief developer of a unique and early form of avant-garde music known as musique concrète. Read more on Wikipedia

Pierre Schaeffer is most famous for his work in musique concrète, which is a form of music made by manipulating recordings of natural sounds.

Among COMPOSERS In France