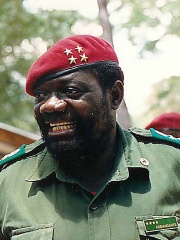 Jonas Malheiro Savimbi (Portuguese: [ˈʒonɐs ˈsavĩbi]; 3 August 1934 – 22 February 2002) was an Angolan revolutionary politician and military leader who founded and led the National Union for the Total Independence of Angola (UNITA). UNITA first waged a guerrilla war against Portuguese colonial rule, 1966–1974, then confronted the People's Movement for the Liberation of Angola (MPLA) during the Angolan Civil War until Savimbi's death in a clash with government troops in 2002. Read more on Wikipedia

Since 2007, the English Wikipedia page of Jonas Savimbi has received more than 849,953 page views. His biography is available in 41 different languages on Wikipedia making him the 89th most popular military personnel.