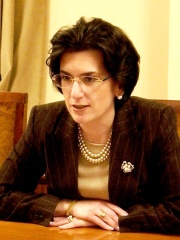 Nino Burjanadze (Georgian: ნინო ბურჯანაძე [ninɔ burd͡ʒɑnɑd͡zɛ], also romanized Burdzhanadze or Burdjanadze, born 16 July 1964) is a Georgian politician and lawyer who served as Chairperson of the Parliament of Georgia from November 2001 to June 2008. As the first woman she has served as the acting head of state of Georgia twice; the first time from 23 November 2003 to 25 January 2004 in the wake of Eduard Shevardnadze's resignation during the Rose Revolution, and again from 25 November 2007 to 20 January 2008, when Mikheil Saakashvili stepped down to rerun in the early presidential elections. She withdrew into opposition to Saakashvili as the leader of the Democratic Movement-United Georgia party in 2008. Read more on Wikipedia

Among politicians, Nino Burjanadze ranks 10,734 out of 15,710. Before her are Adelaide, Countess of Burgundy, Juan Antonio Lavalleja, Vilhelm Buhl, Cædwalla of Wessex, Radu Negru, and Frank Carlucci. After her are Arsites, Eudokia Baïana, Otto III, Duke of Carinthia, Jens Hundseid, Galindo Garcés, and Gnaeus Domitius Ahenobarbus.