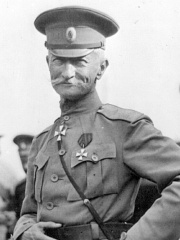 Aleksey Alekseyevich Brusilov (Russian: Алексе́й Алексе́евич Бруси́лов, romanized: Alekséj Alekséevič Brusílov; 1 September [O.S. 19 August] 1853 – 17 March 1926) was a Russian and later Soviet general most noted for the development of new offensive tactics used in the 1916 Brusilov Offensive, which was his greatest achievement. The innovative and relatively successful tactics used were later copied by the Germans. Born into the aristocracy to a father who was also a general, Brusilov trained as a cavalry officer, but by 1914 he realized that cavalry was obsolete in the new style of warfare because of its vulnerability to machine gun and artillery. Read more on Wikipedia

Aleksei Brusilov was a Russian general who is most famous for his offensive in 1916.

Among MILITARY PERSONNELS In Georgia

Among military personnels born in Georgia, Aleksei Brusilov ranks 1. After him are Meliton Kantaria (1920) and Abu Omar al-Shishani (1986).