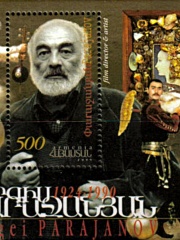 Sergei Parajanov (Armenian: Սերգեյ Փարաջանով; Russian: Сергей Иосифович Параджанов; Georgian: სერგო ფარაჯანოვი; Ukrainian: Сергій Йосипович Параджанов; sometimes spelled Paradzhanov or Paradjanov; January 9, 1924 – July 20, 1990) was a Georgian film director of Armenian origin, screenwriter and artist who made seminal contribution to world cinema with his films Shadows of Forgotten Ancestors and The Color of Pomegranates. Parajanov is regarded by film critics, film historians and filmmakers to be one of the greatest and most influential filmmakers in cinema history.He invented his own cinematic style, which was out of step with the guiding principles of socialist realism; the only sanctioned art style in the USSR. This, combined with his lifestyle and behaviour, led Soviet authorities to repeatedly persecute and imprison him, and suppress his films. Despite this, Parajanov was named one of the 20 Film Directors of the Future by the Rotterdam International Film Festival, and his films were ranked among the greatest films of all time by the British Film Institute's magazine Sight & Sound.Although he started professional film-making in 1954, Parajanov later disowned all the films he made before 1965 as "garbage". After directing Shadows of Forgotten Ancestors (renamed Wild Horses of Fire for most foreign distributions) Parajanov became something of an international celebrity and simultaneously a target of attacks from the USSR. Read more on Wikipedia

Sergei Parajanov is most famous for his films, including Shadows of Forgotten Ancestors, The Color of Pomegranates, and The Legend of Suram Fortress.

Among FILM DIRECTORS In Georgia