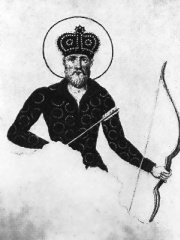 Vakhtang I of Iberia

Vakhtang I Gorgasali (Georgian: ვახტანგ I გორგასალი, romanized: vakht'ang I gorgasali) (c. 439 or 443 – 502 or 522), of the Chosroid dynasty, was a king of Iberia, natively known as Kartli (eastern Georgia) in the second half of the 5th and first quarter of the 6th century. He led his people, in an ill-fated alliance with the Byzantine Empire, into a lengthy struggle against Sasanian Iranian hegemony, which ended in Vakhtang's defeat and weakening of the kingdom of Iberia. Tradition also ascribes him reorganization of the Georgian Orthodox Church and foundation of Tbilisi, Georgia's modern capital.Dating Vakhtang's reign is problematic. Read more on Wikipedia

Vakhtang I of Iberia is most famous for his military conquests that expanded the Kingdom of Iberia to include the neighboring regions of Colchis and Lazica.

Page views of Vakhtang I of Iberias by language

Among politicians, Vakhtang I of Iberia ranks 3,999 out of 15,710. Before him are Caroline Amalie of Augustenburg, Oscar Luigi Scalfaro, Pekahiah, Owen Tudor, Musa Çelebi, and Anastasia of Kiev. After him are Mohammed Omar, Everard des Barres, Francisco Largo Caballero, Concino Concini, Girma Wolde-Giorgis, and Prince Eitel Friedrich of Prussia.