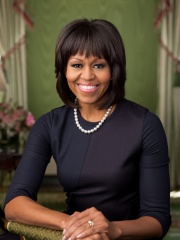 Michelle LaVaughn Robinson Obama (born January 17, 1964) is an American attorney and author who served as the first lady of the United States from 2009 to 2017. She was the first African-American woman to serve in this position. Read more on Wikipedia

Michelle Obama is most famous for being the wife of Barack Obama, the 44th President of the United States. She is also a lawyer and a writer.

Among companions, Michelle Obama ranks 209 out of 687. Before her are Melania Trump, Louisa Ulrika of Prussia, Sophia Magdalena of Denmark, Cecilia Bowes-Lyon, Countess of Strathmore and Kinghorne, Maria Anna of Austria, and Philippa of Lancaster. After her are Princess Wilhelmine of Baden, Louise of the Netherlands, Imelda Marcos, Abigail, Emma of Normandy, and Eleanor of Castile.