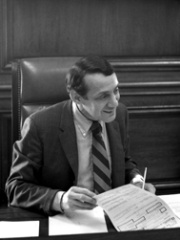 Harvey Bernard Milk (May 22, 1930 – November 27, 1978) was an American politician and the first openly gay man to be elected to public office in California, as a member of the San Francisco Board of Supervisors. Milk was born and raised in New York where he acknowledged his homosexuality as an adolescent, but chose to pursue sexual relationships with secrecy and discretion well into his adult years. Read more on Wikipedia

Harvey Milk was a gay rights activist and politician who was assassinated in 1978. He is most famous for being the first openly gay man to be elected to public office in California.

Among politicians, Harvey Milk ranks 3,520 out of 15,710. Before him are U Nu, Othniel, Lionel Jospin, Urukagina, Hayme Hatun, and Henry II, Duke of Austria. After him are Plaek Phibunsongkhram, Sun Xiu, Arsaces I of Parthia, Niceto Alcalá-Zamora, Sigeric, and Liu Bian.