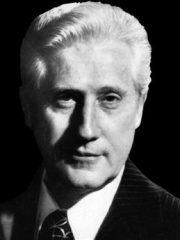 William Mark Felt Sr. (August 17, 1913 – December 18, 2008) was an American law enforcement officer who worked for the Federal Bureau of Investigation (FBI) from 1942 to 1973 and was known for his role in the Watergate scandal. Felt was an FBI special agent who eventually rose to the position of Associate Director, the Bureau's second-highest-ranking post. Read more on Wikipedia

Since 2007, the English Wikipedia page of Mark Felt has received more than 3,099,558 page views. His biography is available in 26 different languages on Wikipedia making him the 3,103rd most popular politician.

Among politicians, Mark Felt ranks 3,081 out of 14,801. Before him are Vasili Kuznetsov, Chivu Stoica, Bruno Kreisky, Éamon de Valera, Emperor Qinzong, and Calchas. After him are Emperor Kanmu, Blanche II of Navarre, Charles III, Duke of Savoy, Sobhuza II, Emperor Keikō, and Henry I of Navarre.