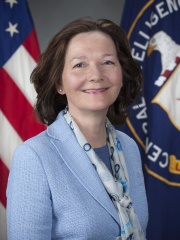 Gina Cheri Walker Haspel (born October 1, 1956), formerly an American intelligence officer, was director of the Central Intelligence Agency (CIA) from 2018 to 2021. The first woman to hold the post on a permanent basis, she had previously worked as the deputy director under Mike Pompeo during the early days of Donald Trump's presidency.She became acting director following Pompeo's resignation in April 2018 and was nominated by President Donald Trump to become the permanent director. On May 17, 2018, she was confirmed as director, becoming the first woman to serve in the role. Read more on Wikipedia

Gina Haspel is most famous for being the first woman to be director of the Central Intelligence Agency.

Among politicians, Gina Haspel ranks 2,841 out of 15,577. Before her are Lu Xun, Natalya Naryshkina, Guy III of Spoleto, Irene of Hungary, Bindusara, and Lin Zexu. After her are Wilhelm Miklas, Duke of Zhou, Michał Korybut Wiśniowiecki, Agostinho Neto, Hasdrubal the Fair, and Lady Sun.