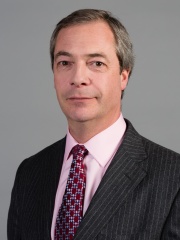 Nigel Paul Farage (; born 3 April 1964) is a British politician, activist, political commentator and broadcaster serving as leader of the Brexit Party since 2019. He was leader of the UK Independence Party (UKIP) from 2006 to 2009 and 2010 to 2016 and served as Member of the European Parliament (MEP) for South East England from 1999 until the United Kingdom's exit from the EU in 2020. He was the host of The Nigel Farage Show, a radio phone-in on the Global-owned talk radio station LBC, from 2017 to 2020.Known as a prominent Eurosceptic in the UK since the early 1990s, Farage campaigned for the United Kingdom's withdrawal from the European Union. Read more on Wikipedia

Since 2007, the English Wikipedia page of Nigel Farage has received more than 5,883,463 page views. His biography is available in 52 different languages on Wikipedia making him the 2,154th most popular politician.

Among politicians, Nigel Farage ranks 2,138 out of 14,801. Before him are Sarvepalli Radhakrishnan, Isabella II of Jerusalem, Emperor Hui of Han, Petronilla of Aragon, Blanche I of Navarre, and Germaine of Foix. After him are August Bebel, Munjong of Joseon, Zhu De, Guntram, Al-Hajjaj ibn Yusuf, and Guillaume de Nogaret.