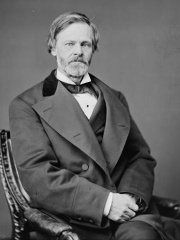 John Sherman (May 10, 1823 – October 22, 1900) was a politician from the U.S. state of Ohio during the American Civil War and into the late nineteenth century. A member of the Republican Party, he served in both houses of the U.S. Congress. He also served as Secretary of the Treasury and Secretary of State. Read more on Wikipedia

Since 2007, the English Wikipedia page of John Sherman has received more than 350,565 page views. His biography is available in 24 different languages on Wikipedia making him the 2,749th most popular politician.

Among politicians, John Sherman ranks 2,731 out of 14,801. Before him are Richard Baer, Robert III of Scotland, Seongjong of Goryeo, Ernest Augustus, King of Hanover, Sergo Ordzhonikidze, and Emperor Dezong of Tang. After him are Cola di Rienzo, Eric VI of Denmark, Emperor Cheng of Han, Rafael Correa, Al-Mansur Qalawun, and Shepseskare.

Among people born in 1823, John Sherman ranks 13. Before him are Sándor Petőfi, Jean-Henri Fabre, Alexandre Cabanel, Édouard Lalo, Leopold Kronecker, and Li Hongzhang. After him are Charles III, Duke of Parma, Frederick Francis II, Grand Duke of Mecklenburg-Schwerin, Mihailo Obrenović, Alexander Ostrovsky, Prince Alexander of Hesse and by Rhine, and Charles I of Württemberg. Among people deceased in 1900, John Sherman ranks 12. Before him are Umberto I of Italy, Ivan Aivazovsky, John Ruskin, Étienne Lenoir, Vladimir Solovyov, and Osman Nuri Pasha. After him are Alfred, Duke of Saxe-Coburg and Gotha, Isaac Levitan, Nicolas Chauvin, Emil Škoda, Wilhelm Liebknecht, and François d'Orléans, Prince of Joinville.