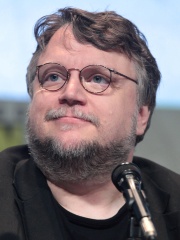 Guillermo del Toro Gómez (Spanish: [ɡiˈʝeɾmo ðel ˈtoɾo]; born October 9, 1964) is a Mexican film director, producer, screenwriter, and author. He is best known for his Academy Award-winning fantasy films Pan's Labyrinth (2006) and The Shape of Water (2017), winning the Oscars for Best Director and Best Picture for the latter. Throughout his career, del Toro has shifted between personal, lower-budget Spanish language films, such as Cronos (1993) and The Devil's Backbone (2001), and Hollywood tentpoles, including Mimic (1997), Blade II (2002), Hellboy (2004) and its sequel Hellboy II: The Golden Army (2008), Pacific Rim (2013), Crimson Peak (2015), and Nightmare Alley (2021). Read more on Wikipedia

Guillermo del Toro is most famous for being a film director, screenwriter, producer, and novelist. He is the director of many popular films such as Pan's Labyrinth, Hellboy, and Pacific Rim.

Among FILM DIRECTORS In Mexico