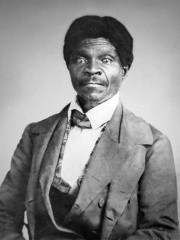 Dred Scott (c. 1799 – September 17, 1858) was an enslaved African-American man who, along with his wife, Harriet, unsuccessfully sued for freedom for themselves and their two daughters in the Dred Scott v. Sandford case of 1857, popularly known as the "Dred Scott decision". Read more on Wikipedia

Since 2007, the English Wikipedia page of Dred Scott has received more than 2,571,237 page views. His biography is available in 21 different languages on Wikipedia. Dred Scott is the 2,999th most popular politician (up from 3,051st in 2019), the 987th most popular biography from United States (down from 978th in 2019) and the 79th most popular American Politician.

Dred Scott was a slave who sued for his freedom and that of his wife and children. The Supreme Court ruled that slaves were not citizens and therefore could not sue in federal court. This decision was overturned by the 13th Amendment to the Constitution, which abolished slavery.

Among politicians, Dred Scott ranks 2,999 out of 15,710. Before him are Eleanor of Navarre, Ibrahim ibn al-Walid, Tiberius Gemellus, Andreas Papandreou, Fath-Ali Shah Qajar, and Userkare. After him are Mohamed Farrah Aidid, Berenice III of Egypt, Felipe González, Pekah, Adélaïde of France, and Joko Widodo.