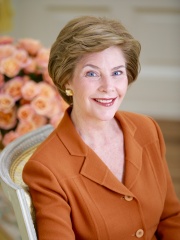 Laura Lane Welch Bush (née Welch; born November 4, 1946) is an American teacher, librarian, memoirist and author who was the first lady of the United States from 2001 to 2009. Bush previously served as the first lady of Texas from 1995 to 2000. She is the wife of former President George W. Read more on Wikipedia

Laura Bush is most famous for being the wife of George W. Bush, the 43rd President of the United States. She was First Lady from 2001 to 2009.

Among companions, Laura Bush ranks 286 out of 687. Before her are Flavia Maximiana Theodora, Constance of Castile, Statilia Messalina, Dorothea of Brandenburg, Elizabeth of Bohemia, and Berengaria of Portugal. After her are Anna Porphyrogenita, Rosalynn Carter, Nur Jahan, Catherine, Duchess of Cambridge, Adelaide of Aquitaine, and Maria Sophia of Neuburg.