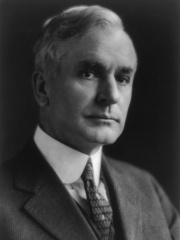 Cordell Hull (October 2, 1871 – July 23, 1955) was an American politician from Tennessee best known as the longest-serving U.S. Secretary of State, holding the position for 11 years (1933–1944) in the administration of President Franklin Delano Roosevelt during most of World War II. Hull received the Nobel Peace Prize in 1945 for his role in establishing the United Nations, and was referred to by President Roosevelt as the "Father of the United Nations".Born in Olympus, Tennessee, he pursued a legal career after graduating from the Cumberland School of Law. He won election to the Tennessee House of Representatives and served in Cuba during the Spanish–American War. He represented Tennessee in the United States House of Representatives from 1907 to 1921 and from 1923 to 1931. Read more on Wikipedia

Since 2007, the English Wikipedia page of Cordell Hull has received more than 587,434 page views. His biography is available in 46 different languages on Wikipedia making him the 3,740th most popular politician.

Among politicians, Cordell Hull ranks 3,717 out of 14,801. Before him are Wenceslaus I, Duke of Luxembourg, John III of Navarre, Peter Stuyvesant, Herschel Grynszpan, Eric XII of Sweden, and Alexander Pechersky. After him are Tudḫaliya IV, Muhammad I of Granada, Hyeokgeose of Silla, George Clinton, Franz I, Prince of Liechtenstein, and Locusta.