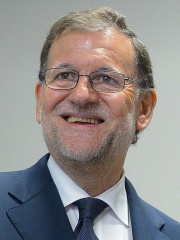 Mariano Rajoy Brey (Spanish: [maˈɾjano raˈxoj]; born 27 March 1955) is a Spanish politician who served as Prime Minister of Spain from 2011 to 2018, when a vote of no confidence ousted his government. On 5 June 2018, he announced his resignation as People's Party leader.He became Leader of the People's Party in 2004 and Prime Minister in 2011 following the People's Party landslide victory in that year's general election becoming the sixth President of the Spanish Government. The party lost its majority in the 2015 general election, but after that election ended in deadlock, a second election in 2016 enabled Rajoy to be reelected Prime Minister as head of a minority government. Read more on Wikipedia

Mariano Rajoy is most famous for being the Prime Minister of Spain from 2011 to 2018.

Among politicians, Mariano Rajoy ranks 3,124 out of 15,710. Before him are Yazdegerd II, Victor Amadeus III of Sardinia, Yitzhak Navon, Maria of Yugoslavia, Emperor Ōjin, and Cao Mao. After him are Emperor Suinin, Dalia Grybauskaitė, Emperor Qinzong, Catherine of Sweden, Countess Palatine of Kleeburg, Anatoly Lunacharsky, and Goujian.