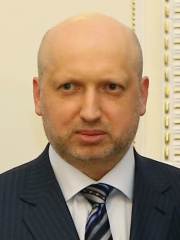 Oleksandr Valentynovych Turchynov (Ukrainian: Олександр Валентинович Турчинов; born 31 March 1964) is a Ukrainian politician, screenwriter, Baptist minister and economist. He is the former Secretary of the National Security and Defence Council of Ukraine.In 2005, Turchynov served as the head of the Security Service of Ukraine. Turchynov is a former acting President of Ukraine from the removal from power of President Viktor Yanukovych on 21 February 2014, until Petro Poroshenko was sworn in as Ukrainian President on 7 June 2014. Read more on Wikipedia

Since 2007, the English Wikipedia page of Oleksandr Turchynov has received more than 844,480 page views. His biography is available in 51 different languages on Wikipedia making him the 6,960th most popular politician.

Among politicians, Oleksandr Turchynov ranks 6,919 out of 14,801. Before him are Valerius Romulus, Jean-Pierre Jabouille, Constance of Castile, Duchess of Lancaster, Aleida March, Constantine Phaulkon, and Constantine Kanaris. After him are Motilal Nehru, Hudjefa I, Idris II of Morocco, Si Inthrathit, Giovanni Morelli, and Prince John Konstantinovich of Russia.