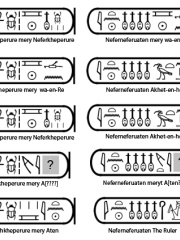 Ankhkheperure-Merit-Neferkheperure/Waenre/Aten Neferneferuaten (Ancient Egyptian: nfr-nfrw-jtn) was a name used to refer to a female pharaoh who reigned toward the end of the Amarna Period during the Eighteenth Dynasty. Her gender is confirmed by feminine traces occasionally found in the name and by the epithet Akhet-en-hyes ("Effective for her husband"), incorporated into one version of her nomen (birth name) cartouche. She is distinguished from the king Smenkhkare who used the same throne name, Ankhkheperure, by the presence of epithets in both cartouches. Read more on Wikipedia

Page views of Neferneferuatens by language