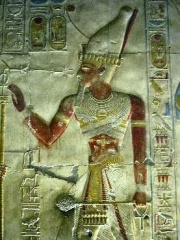 Menmaatre Seti I (or Sethos I in Greek) was the second pharaoh of the Nineteenth Dynasty of Egypt during the New Kingdom period, ruling c.1294 or 1290 BC to 1279 BC. He was the son of Ramesses I and Sitre, and the father of Ramesses II. The name 'Seti' means "of Set", which indicates that he was consecrated to the god Set (also termed "Sutekh" or "Seth"). As with most pharaohs, Seti had several names. Upon his ascension, he took the prenomen "mn-m3't-r' ", usually vocalized in Egyptian as Menmaatre (Established is the Justice of Re). Read more on Wikipedia

SETI is most famous for the search for extraterrestrial intelligence.

Page views of Seti IS by language

Among politicians, Seti I ranks 332 out of 15,577. Before him are Semiramis, Edward I of England, B. R. Ambedkar, Numa Pompilius, Edward V of England, and Charles VIII of France. After him are Qianlong Emperor, Leopold II of Belgium, Louis XI of France, Henry IV, Holy Roman Emperor, Yitzhak Rabin, and Alexander Dubček.