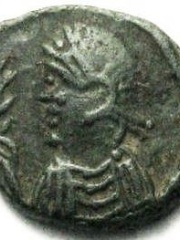 Huneric or Hunneric or Honeric (died December 23, 484) was King of the (North African) Vandal Kingdom (477–484) and the oldest son of Genseric. He abandoned the imperial politics of his father and concentrated mainly on internal affairs. He was married to Eudocia, daughter of western Roman Emperor Valentinian III (419–455) and Licinia Eudoxia. Read more on Wikipedia

Since 2007, the English Wikipedia page of Huneric has received more than 110,043 page views. His biography is available in 32 different languages on Wikipedia (up from 30 in 2019). Huneric is the 2,618th most popular politician (up from 3,008th in 2019), the 237th most popular biography from Spain and the 83rd most popular Spanish Politician.

Huneric was most famous for being the last ruler of the Vandal Kingdom. He ruled from 477 to 479 AD. He was overthrown by Gelimer, who was the brother of Genseric.

Page views of Hunerics by language

Among politicians, Huneric ranks 2,618 out of 15,710. Before him are Kiro Gligorov, Taksin, Nicola Amati, Zhao Gao, Robert IV of Sablé, and Abdurrahman Wahid. After him are Ferdinand Karl, Archduke of Austria-Este, P. W. Botha, Sigebert I, Henry the Young King, Fritigern, and Michal.