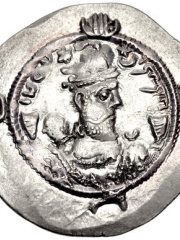 Bahrām Chōbīn (Persian: بهرام چوبین) or Wahrām Chōbēn (Middle Persian: 𐭥𐭫𐭧𐭫𐭠𐭭), also known by his epithet Mehrbandak ("servant of Mithra"), was a nobleman, general, and political leader of the late Sasanian Empire and briefly its ruler as Bahram VI (r. 590-591). Son of general Bahram Gushnasp and hailing from the noble House of Mihran, Bahram began his career as the governor of Ray, and was promoted to the army chief (spahbed) of the northwestern portions of the empire after capturing the Byzantine stronghold of Dara, fighting in the war of 572–591. Read more on Wikipedia

Bahram Chobin was a Sasanian general who led the Sasanian army to victory against the Romans in the Battle of Edessa in 260.

Among people born in 600, Bahram Chobin ranks 18. Before him are Pope Severinus, Abu Dhar al-Ghifari, Pope Theodore I, Maria al-Qibtiyya, Muadh ibn Jabal, and Rayhana bint Zayd. After him are Abu Musa al-Ash'ari, Shahrbaraz, Cosmas Indicopleustes, Ubayy ibn Ka'b, Bayan I, and Hudhayfah ibn al-Yaman. Among people deceased in 592, Bahram Chobin ranks 2. Before him is Guntram. After him is Emperor Sushun.