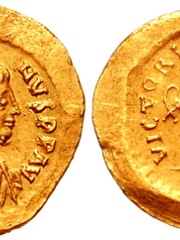 Justin I (Latin: Flavius Iustinus; Greek: Ἰουστῖνος, Ioustînos; 2 February 450 – 1 August 527) was the Byzantine emperor from 518 to 527. He rose through the ranks of the army to become commander of the imperial guard, and when Emperor Anastasius died he out-maneouvered his rivals and was elected as his successor, in spite of being almost 70 years old. His reign is significant for the founding of the Justinian dynasty that included his eminent nephew Justinian I and three succeeding emperors. Read more on Wikipedia

Since 2007, the English Wikipedia page of Justin I has received more than 464,064 page views. His biography is available in 52 different languages on Wikipedia (up from 51 in 2019). Justin I is the 777th most popular politician (up from 909th in 2019), the 4th most popular biography from North Macedonia (down from 3rd in 2019) and the 2nd most popular Macedonian Politician.

Justin I was the first Byzantine emperor, and he is most famous for the Nika riots.

Page views of Justin IS by language

Among politicians, Justin I ranks 777 out of 15,710. Before him are François Hollande, Trygve Lie, Alexander Kerensky, Henry VII, Holy Roman Emperor, Lavrentiy Beria, and Walter Ulbricht. After him are Harald Bluetooth, Simon of Cyrene, Petronius Maximus, Chaim Weizmann, Enver Pasha, and Gustav IV Adolf of Sweden.