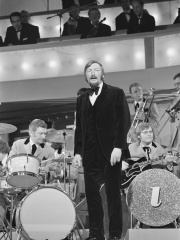 James Last (German pronunciation: [tʃeɪms last], [dʃeɪms lɑːst]; born Hans Last; 17 April 1929 – 9 June 2015), also known as Hansi, was a German composer and big band leader of the James Last Orchestra. Initially a jazz bassist (Last won the award for "best bassist" in Germany in each of the years 1950–1952), his trademark "happy music" made his numerous albums best-sellers in Germany and the United Kingdom, with 65 of his albums reaching the charts in the UK alone. Read more on Wikipedia

James Last was a German pianist and composer who was most famous for his easy listening piano music.

Among musicians, James Last ranks 118 out of 2,675. Before him are David Oistrakh, Karl Thomas Mozart, Cliff Richard, Ravi Shankar, Bill Evans, and Neil Young. After him are Till Lindemann, Fritz Kreisler, Tony Iommi, Don Shirley, Compay Segundo, and Pete Best.