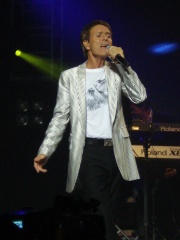 Sir Cliff Richard (born Harry Rodger Webb; 14 October 1940) is an English singer who holds both British and Barbadian citizenship. He has sold more than 250 million records worldwide, making him one of the best-selling music artists of all time. He has total sales of over 21.5 million singles in the United Kingdom and is the third-top-selling artist in UK Singles Chart history, behind the Beatles and Elvis Presley.Richard was originally marketed as a rebellious rock and roll singer in the style of Presley and Little Richard. Read more on Wikipedia

Cliff Richard is most famous for being a singer. He has been singing since the 1950s and has had many hits on the charts.

Among musicians, Cliff Richard ranks 114 out of 2,675. Before him are Barry Gibb, Amir Khusrow, Fernando Sor, Ritchie Valens, David Oistrakh, and Karl Thomas Mozart. After him are Ravi Shankar, Bill Evans, Neil Young, James Last, Till Lindemann, and Fritz Kreisler.