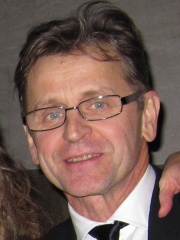 Mikhail Nikolayevich Baryshnikov (Russian: Михаил Николаевич Барышников, IPA: [mʲɪxɐˈil bɐ'rɨʂnʲɪkəf]; Latvian: Mihails Barišņikovs; born January 28, 1948) is a Soviet Latvian-born Russian-American dancer, choreographer, and actor. He was the preeminent male classical dancer of the 1970s and 1980s. He subsequently became a noted dance director.Born in Riga, Latvian SSR, Baryshnikov had a promising start in the Kirov Ballet in Leningrad before defecting to Canada in 1974 for more opportunities in Western dance. Read more on Wikipedia

Mikhail Baryshnikov is a Russian dancer and choreographer. He is most famous for his work with the New York City Ballet and for his role in the film The Turning Point.

Among DANCERS In Latvia